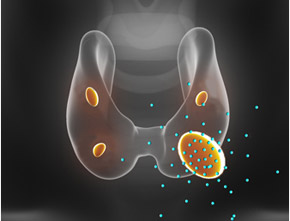 Hyperparathyroidism (HPT) often presents with very vague symptoms that can occur with other diseases and conditions, so the parathyroid disease diagnosis is made mostly on laboratory tests. A Canadian osteoporosis study showed that 1.4% of the population has typical HPT with high calcium and high PTH, which is relatively easy to diagnose; however, another 3.3% had normocalcemic hyperparathyroidism, which means they had normal calcium and elevated PTH. This group of patients is often misdiagnosed because their calcium is in the normal range, and routine testing does not include PTH, and so their disease continues to progress until they develop more severe symptoms, including kidney stones, or osteoporosis. The disease entity Normocalcemic Hyperparathyroidism was officially recognized in 2008, which means most of the physicians that are in practice today were never educated about it.

The key to making the proper parathyroid disease diagnosis (HPT or any form of it) is to look at the relationship between calcium and PTH on blood tests. In a person that has normal parathyroid glands, when the calcium is low (low end of normal) the PTH will be high (high end of normal) because PTH causes calcium to be released out of the bones and reabsorbed from the urine in the kidneys, and Vitamin D is activated to help absorb calcium from food.   When the calcium level rises the parathyroid gland shuts down and PTH level goes down because there is no further need for calcium to be taken out of bones, and urine.  Below are some detailed diagrams about the different forms of the disease. The situation is very different in a person that has an abnormal parathyroid gland: The calcium will be high or high normal, and PTH will be high or high normal as well. In this situation, the relationship between calcium and PTH is not inverse. In the diagram below you’ll see that although there is a high blood calcium level the parathyroid glands are still producing PTH, which is going into the bones and releasing calcium (in time leading to osteoporosis and fractures), in the kidneys leading to more calcium collecting in the kidney (leading to kidney stones), and many other problems. 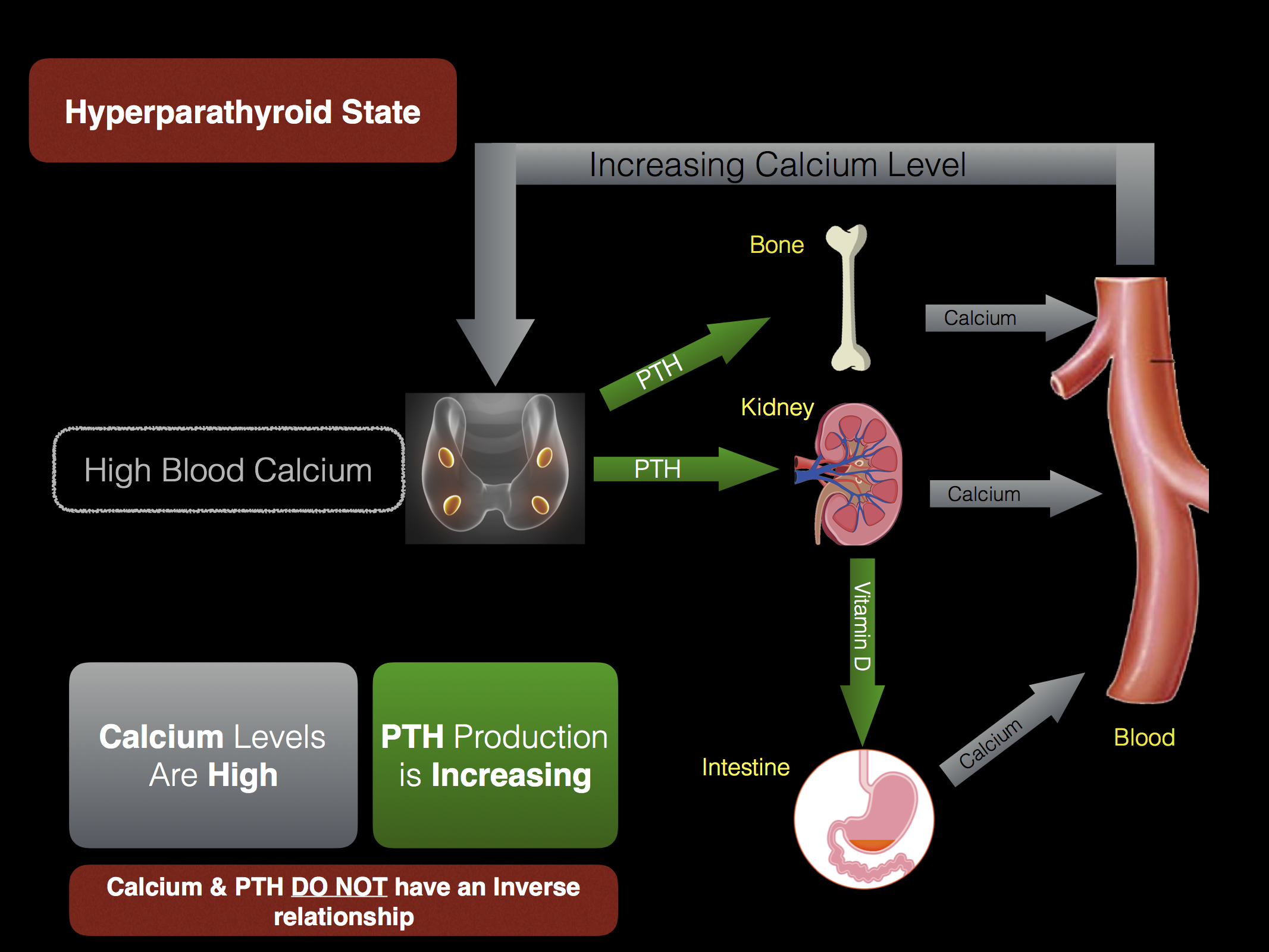 Furthermore, here is another chart to explain the different presentations of the disease: 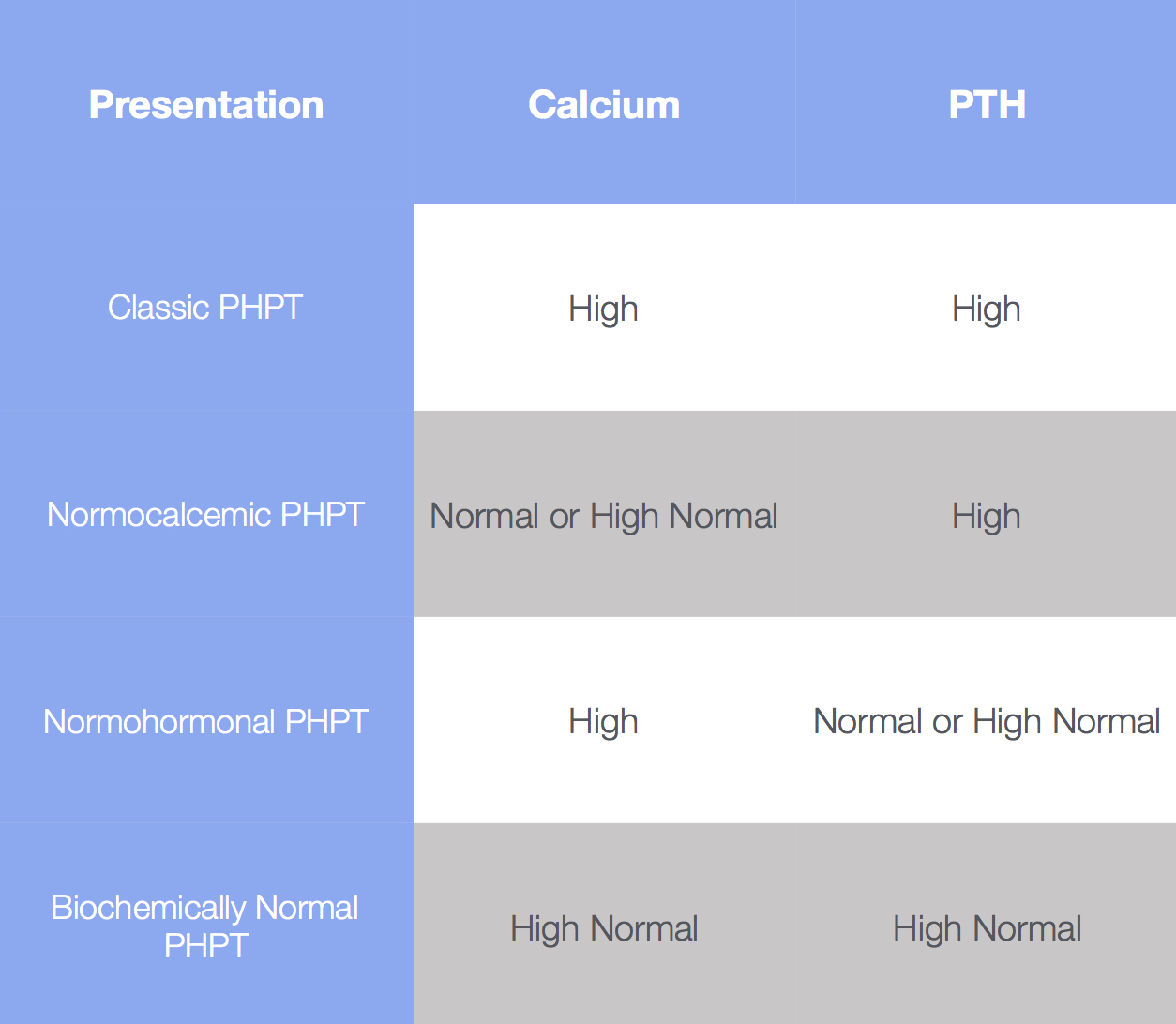 The majority of patients living with normocalcemic primary hyperparathyroidism go undiagnosed for years because they have normal or high normal calcium levels, even though their PTH levels are above normal.

Below are four different examples of patients with parathyroid disease at the CENTER for Advanced Parathyroid Surgery. You can see that each patient presented with unique symptoms and lab results. A parathyroid disease expert, like Dr. Larian, is needed in these cases to properly diagnose patients, especially with the “non-textbook” presentations of the disease. 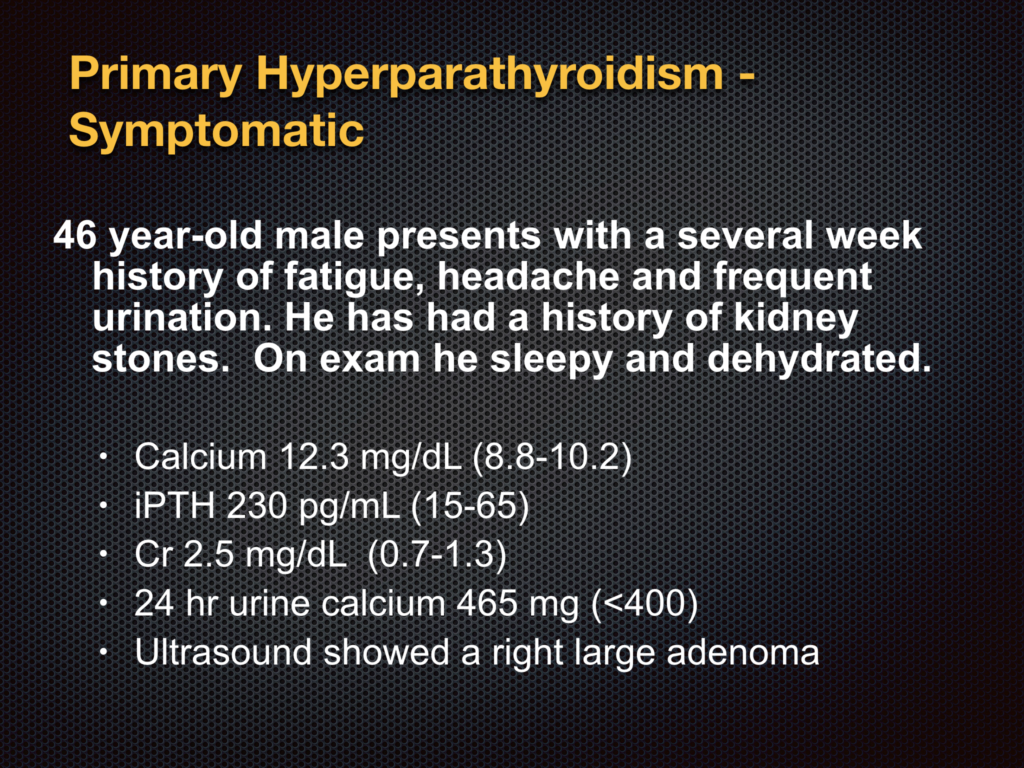 This patient had symptoms for a long time, but was very busy with work and did not have a workup suggested by his doctors for the kidney stones. His symptoms became severe enough to force him to go to the emergency room where he had the proper tests done to diagnoses him with hyperparathyroidism. He was hydrated and kept in the hospital until his kidney function returned to normal. He was then seen at the CENTER and had an ultrasound again by Dr. Larian to plan for the surgery. This patient was seen by multiple specialists but because her calcium was not deemed to be very high, and she did not have osteoporosis on the bone density scan (DEXA), but rather osteopenia (precursor to osteoporosis), she was advised to wait and see if the disease will progress. And over the years, her calcium numbers never elevated beyond 10.4, but her symptoms became worse, and her bone density showed further thinning of the bones but not yet at osteoporosis level. She did not qualify for surgery based on the national guidelines even though she was unable to work. She had had a previous negative ultrasound. At the CENTER she was advised to undergo a Sestamibi SPECT scan that showed the location of the abnormal parathyroid gland. This patient underwent a workup for a wrist fracture. Because of the extent of the fracture in his wrist was disproportionate to the impact (playing with his 2 year old child).  The bone density scan (DEXA) showed he had osteoporosis and severe thinning of the bones in multiple areas.  As part of work up for early onset osteoporosis he had a PTH level that was high, and remained high on repeat testing although his calcium was always in the normal range.  Over the years his calcium had been checked on his annual exam and blood tests, but because it had always been normal the PTH level was not checked, especially his other parathyroid symptoms had been vague and non-specific.  He was referred to the CENTER by his endocrinologist for a surgical cure.  After surgery, he underwent gradually increasing weight bearing exercise to stimulate his bone to get stronger, and repeated the DEXA scan a year later which showed significant improvement in bone density. This patient had slight elevation in calcium levels for years and what always seemed to have a normal PTH level (although the PTH level was never on the low end of normal range).  Due to frustration with not having a diagnosis and feeling that her symptoms are progressing disproportionate to her age, and generally feeling “something was wrong” she chose to come to the CENTER to undergo further work up.  We looked at all her labs over the years and discovered that there was no suppressive relationship between the calcium and PTH.  We also did further testing to make sure no other causes of high calcium levels were present.  Afterwards,  she had a negative ultrasound and because her PTH was low we chose to have a 4D parathyroid CT scan which identified the abnormal parathyroid gland. In normal functioning parathyroid glands, if the blood test indicates too much calcium in the blood, the parathyroid hormone (PTH) levels should be low (or suppressed) so that the body has a chance to bring the calcium back down to normal. If this suppressive pattern is not present and on 2 separate occasions the blood tests show a calcium & PTH imbalance, then the diagnosis of hyperparathyroidism is confirmed.  Ofthe times at the CENTER, we will have to repeat the laboratory tests to both confirm the diagnosis of hyperparathyroidism and also look at all other possible diseases that can cause a calcium imbalance.

Normal Vitamin D levels in adults are between 30 and 100 ng/mL. Vitamin D helps our intestines absorb calcium from the food we eat, as well as helps our bones reshape themselves and grow stronger.  Vitamin D has many other important functions, most of which has been recently discovered.  It is a very important vitamin.

Low Vitamin D level is very common even in healthy people.  It is especially common in people with hyperparathyroidism; it’s found in about 80% of patients who have high blood calcium and PTH levels. There are 2 possible reasons for this phenomenon:

1- SECONDARY HYPERPARATHYROIDSIM DUE TO VITAMIN D DEFICIENCY –  If the person has a vitamin D deficiency, it can secondarily cause an elevation in PTH level, which may cause calcium to rise up as well.  These patients generally have normal or slightly elevated calcium levels, and when the vitamin D is replenished and comes back to normal levels, the PTH and calcium come down to normal levels.

2- LOW VITAMIN D LEVEL DUE TO ALTERED VITAMIN D METABOLISM – When the calcium rises in hyperparathyroidism the body is not able to decrease the calcium level in the blood because the parathyroid glands are mainly in charge of controlling the blood calcium level, and now that they are malfunctioning the calcium level stays up.  It has been theorized that since the abnormal parathyroids can’t be controlled to bring calcium down, the body tries to decrease vitamin D levels to be able to decrease calcium absorption from foods.  In this group of patients that have primary hyperparathyroidism, not only vitamin D replacement does not correct the PTH and calcium imbalance, it may also make them feel worse.  These patients feel especially bad, when given the high dose weekly Vitamin D.

However, plenty of adults are deficient in Vitamin D but do not have parathyroid disease. Vitamin D deficiency can occur as a result of poor diet and/or not spending enough time outdoors. In these cases, people simply need to take a Vitamin D supplement to return their levels to the normal range in order to maintain good health and bone calcium.

A hyperparathyroid diagnosis is made purely by patient’s symptoms and blood tests.  Sestamibi scans, ultrasound, CT Scan or MRI do not help with the diagnosis, but rather the location of a parathyroid tumor. Once it is determined that you have hyperparathyroid disorder, then Dr. Larian will move on to scans to locate the tumor prior to surgery.

I traveled from Washington DC to Los Angeles to have Dr. Larian perform my recent parathyroidectomy. I struggled unsuccessfully for months to find a local surgeon who could diagnose my hyperparathyroidism, and was fortunate enough to learn about Dr. Larian while doing my own research. Few doctors are knowledgeable about parathyroid disease, even fewer can perform the surgery successfully using minimally invasive procedures. After years of vague symptoms and months of severe symptoms, just days after surgery I feel better than I have in such a long time.

If you have been living with the signs and symptoms of hyperparathyroid disease, it is time to be properly diagnosed! At the CENTER for Advanced Parathyroid Surgery in Los Angeles, you couldn’t be in better hands than with our parathyroid specialist. Dr. Larian treats every patient on an individualized basis and his top priority is curing your disease.