HPT Testing: Everything You Need to Know About Rapid Intraoperative PTH Assessments

Our philosophy at the CENTER for Advanced Parathyroid Surgery is to be as thorough and comprehensive as possible. Traditionally, parathyroid surgery was difficult to perform, and it was challenging to achieve the desired surgery results due to the following factors:

This invasive approach to surgery resulted in high complication rates and inconsistent outcomes. This is why Dr. Babak Larian has continued to stay on the cutting edge of science & technological advances to improve treatment of hyperparathyroidism.  Today, Dr. Larian utilizes a minimally invasive approach to cure hyperparathyroidism (HPT); this means that during surgery he only finds and removes the abnormal parathyroid gland, and does not disturb and impact the normal parathyroid glands.  The notion of minimally invasive surgery is depends on the fact that the surgeon should not disturb areas, organs, glands that are healthy and should be allowed to fully function for the person.  This was not achievable in the past because of the need to find all four glands to either visually decide or use radioguidance to decide which parathyroid gland is abnormal. 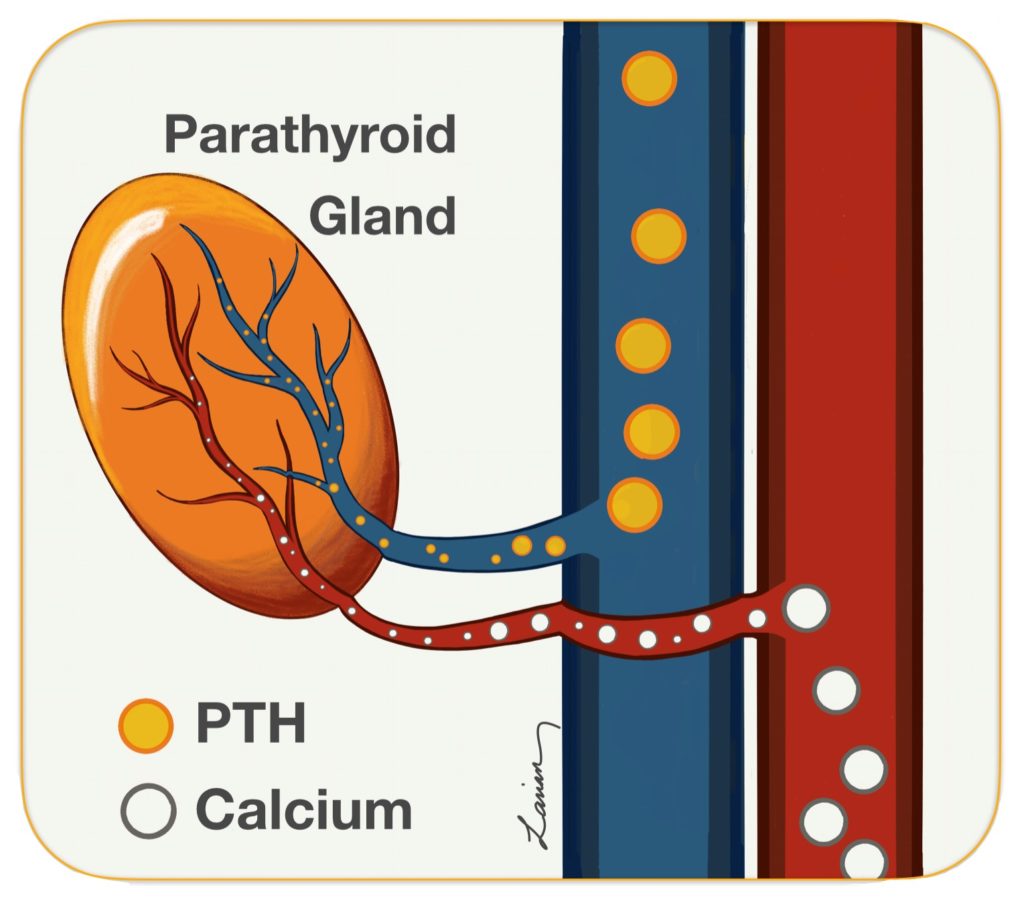 So when treating hyperparathyroidism caused by a single parathyroid adenoma, the search for the remaining normal can cause damage for the smaller normal sleepy parathyroid glands and their smaller blood vessels.  Which could cause permanent hypoparathyroidism.  Minimally invasive focused parathyroidectomy with intraoperative PTH testing cannot cause hypoparathyroidism in a person that has one abnormal gland.

Parathyroid Hormone or PTH is released into the blood by the parathyroid gland in response to low calcium.  PTH has a very short half life of about 5 minutes, which means that half of the PTH produced at this moment is broken down and will not work in 5 minutes, by 10 minutes 75% is broken down.  In 1990’s a brilliant physician Dr. George Irvin at the University of Miami realized he could use this information to help in surgery.  He understood that when a parathyroid adenoma is working hard and producing a lot of hormone (PTH), then the remaining normal glands would not need to work.  These none working parathyroid glands shrink, get smaller (atrophy), and produce very little PTH.  When the parathyroid adenoma is removed in surgery, the normal smaller parathyroid glands that have not been doing much work for a long time will still make very little PTH.  It takes a few weeks before these normal glands go back to working normally.

The problem had been up to this point that the laboratory test to check for PTH took several hours to days to give results, which made it not useful during surgery.  However, Dr. Irvin had at his hospital a rapid PTH machine which he could get results in 30 minutes.  This was also a revolutionary change in parathyroid surgery, because with rapid PTH testing you didn’t have to inject a foreign radioactive material to check the level of activity of the parathyroids, but rather the surgeon could just check the amount of PTH hormone being produced during surgery to know if there are still over-active parathyroid glands. Minimally invasive parathyroidectomy with rapid intraoperative PTH testing was very exciting, because it could truly let surgeons be minimally invasive (meaning in surgery only disturb the abnormal gland), and check how active the other 3 glands were by directly checking the blood levels of PTH, the hormone causing all the problems in hyperparathyroidism.   Over time surgeons realized intraoperative PTH testing was even more useful than originally anticipated; not only could the surgeon confirm the the success of surgery once the abnormal gland or glands had been removed, they could also make sure the remaining glands were still working.  The combination of minimally invasive parathyroidectomy and intraoperative PTH testing has proven to be very reliable with 99% cure rates being reported with this approach. While at the same time minimizing risks because you explore more then one area only when PTH levels don’t come down appropriately (which happens less then 25% of cases).  So the 75% of people who have a single adenoma don’t need to under go a surgery that risks damage to the nerves, blood vessels, thyroid and parathyroids on both sides. However, there was a clear limitation to this technology; the rapid PTH testing machine was not available at most hospitals.  So most parathyroid surgeons did not have access to it. And it took years for surgeons that were dedicated to doing parathyroid surgery to convince their hospitals to purchase these expensive machines and learn how to use intraoperative rapid PTH testing properly.  In my case this happened in 2005.   Additionally, it required the surgeon to change the way they performed the surgery:  (1) they had to have more exact localization studies then the sestamibi nuclear scan alone to find the enlarged parathyroid gland, and (2) the surgery took longer because they had to wait an additional 30 minutes during surgery to get blood PTH results during which they had to mostly sit patiently to see if the numbers came to down appropriately before they were confident the parathyroid they had removed was the only one that was overworking.  Not all surgeons had that kind of patience, and if the PTH level did not come down then they had to continue operating and keep testing which could make the surgery much longer.  It required parathyroid surgeons to make a complete shift in the way they did parathyroid surgery.

Watch the video below to learn even more about how Dr. Larian performs minimally invasive parathyroidectomy to cure his patients from hyperparathyroidism!

Parathyroidectomy surgery and associated intra-operative PTH testing are sometimes tough to understand. Fortunately, Dr. Larian prioritizes patient education, and provides answers to some of the most frequently asked questions surrounding PTH testing below.

What is the difference between a regular PTH test and rapid Intraoperative PTH testing?

A regular PTH test is used to help determine if a patient is dealing with a diseased parathyroid gland, and hyperparathyroidism. It is a blood test that is not done in an urgent way, and usually takes several hours to days to give results.  The rapid intraoperative PTH test gives results between 10-30 minutes which allows it to be used during surgery.

Yes.  Caution is key with parathyroidectomy surgery, and thanks to a PTH blood test, an HPT patient receives assurance that all diseased parathyroid glands were properly removed during surgery. Plus, a PTH test is simple to perform and helps determine if a patient is coping with multiple abnormal parathyroid glands.  The surgeon will know before the patient leaves the operating room that the surgery was successful.

As in the case below, this person had high calcium levels and PTH that was 86 immediately before the surgery started.  10 minutes after the right upper parathyroid adenoma was removed, the PTH level dropped to 32, which is more then the 50%
decrease necessary .  This shows that the 3 remaining parathyroids are not working much, therefore they are normal parathyroid glands.  The surgeon can tell the patient, immediately after surgery, with confidence that the surgery was very successful. How does rapid intraoperative parathyroid hormone test help the surgeon figure out that the patient has a double adenoma? Can parathyroid gland surgery be performed without PTH testing?

It can be done without it, but the risk of not being successful is higher. Dr. Larian requires PTH testing during parathyroid gland surgery. Since PTH testing helps Dr. Larian determine the success of a parathyroidectomy procedure, a PTH test must be performed on all MIP patients.

What happens after a rapid intraoperative parathyroid hormone test?

Ultimately, a hyperparathyroid patient wants a PTH test to return results that show that the PTH level has normalized in the blood. If a patient achieves normal PTH level, it means that a parathyroid gland surgery delivered the desired results. On the other hand, if a PTH test reveals that a patient’s PTH level remains higher then expected, additional parathyroid glands are diseased and need to be removed.

Yes, absolutely.  In hyperplasia cases where all 4 parathyroid glands are different sizes, when localization scans are done 1 or 2  of the larger parathyroids may show up on the scan but not the small ones.  So lets look at the case below:

A 43 year old woman with chronic pain and osteoporosis.  Calcium levels have slowly been rising up over the past decade, and have been above normal range over the past 4 years.  PTH levels are also gradually increasing.  Sestamibi and 4D parathyroid CT scans were both negative.  Ultrasound done in the office indicated possible enlarged parathyroids in the left upper and right lower areas.  She does have a family history of an aunt with untreated hypercalcemia.  All together there was a higher degree of suspicion that this may represent parathyroid hyperplasia. 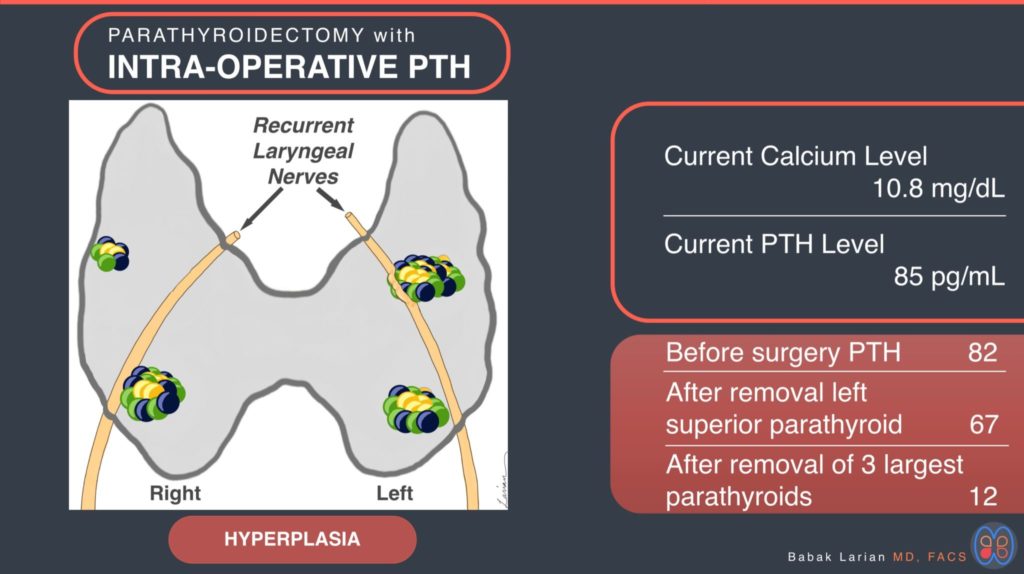 Is a PTH blood test safe?

Yes, a PTH blood test is a safe, effective way to help rule out the presence of additional abnormal parathyroid glands in the body. This PTH test can be completed quickly and delivers results that help Dr. Larian provide the best treatment for a patient’s HPT symptoms.

Can anyone perform a PTH test?

The rapid PTH machines are highly technical and expensive machines, so the appropriate team needs to be in place to be able to do it properly.  Dr. Larian has created this team to best serve his patients. Dr. Larian works diligently to help patients minimize risk during a parathyroidectomy surgery, as well as provides post-treatment care instructions. Dr. Larian also conducts in-depth PTH testing and shares the test results with a patient after a parathyroidectomy surgery.

Why Do Patients Choose The CENTER & Dr. Larian for Parathyroidectomy Surgery?

Localization studies and intra-operative PTH testing are crucial parts of hyperparathyroidism surgery. Yet, these assessments are sometimes ignored as part of the parathyroidectomy treatment process. And in some instances, HPT patients suffer the consequences.

By partnering with Dr. Larian, patients receive personalized support to treat HPT symptoms. First, Dr. Larian helps the patients come to the correct diagnosis, and then  conducts the appropriate localization studies to identify any abnormal parathyroid glands. Dr. Larian then offers a custom treatment plan to address diseased parathyroid glands, which may include parathyroidectomy surgery.

Talk to a Parathyroid Expert Today!

If you would like to know more about the benefits of intra-operative PTH testing, or if you are considering an MIP, schedule a consultation with our parathyroid expert, Dr. Larian, by calling 310.461.0300 today!