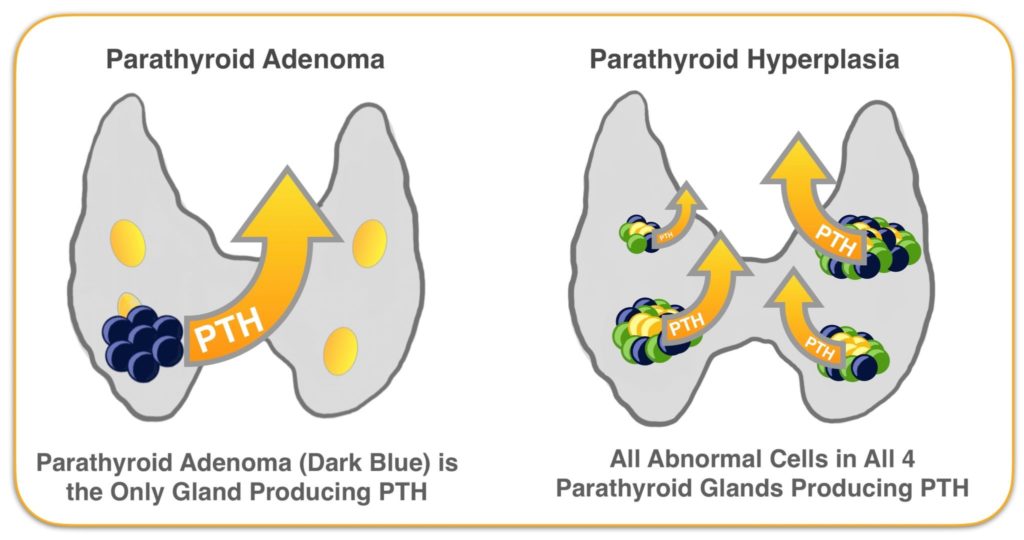 Parathyroid glands have each millions of cells in them.  All of these parathyroid cells have calcium sensor (Calcium Sensing Receptor or CaSR) that has a genetically predetermined calcium setting.  This means all the parathyroid cells in all 4 glands normally try to keep the blood calcium level the same number the entire life of a human being.  If one of these cells in one parathyroid gland gets exposed to a toxin that causes a mutation in it that changes the setting for calcium to a higher number, then that cell (not realizing it is making a mistake) will do everything it can to bring the blood calcium level to that higher number. 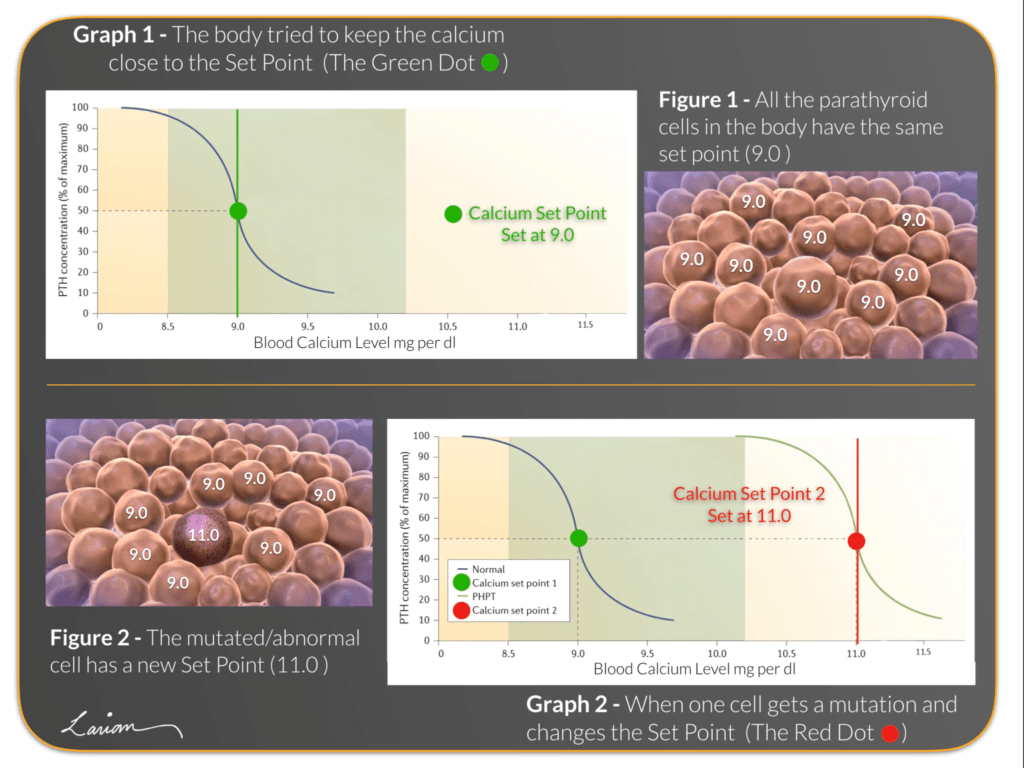 As an example if the person’s normal calcium setting is 9.0 mg/dL, and one cell develops a mutation in the calcium sensing mechanism (like a change in the thermostat setting), making the mutated parathyroid cell want a higher calcium level (calcium of 11.0 mg/dL – Graph 1 changes into Graph 2).  The mutated parathyroid adenoma cell that is trying to make the blood calcium level be higher, works hard to achieve this.  In the process it keeps duplicating it self and getting bigger and bigger (dark blue cells in diagrams 2,3 & 4 – Figure 2).  Parathyroid adenomas start very small but in time grow to be large (almost one inch long).  They only cause problems because they produce hormone not because they get large enough to push on the surrounding tissue; they don’t directly cause neck pain or breathing issues.  They don’t’ have any nerves growing into them, so they are not felt. 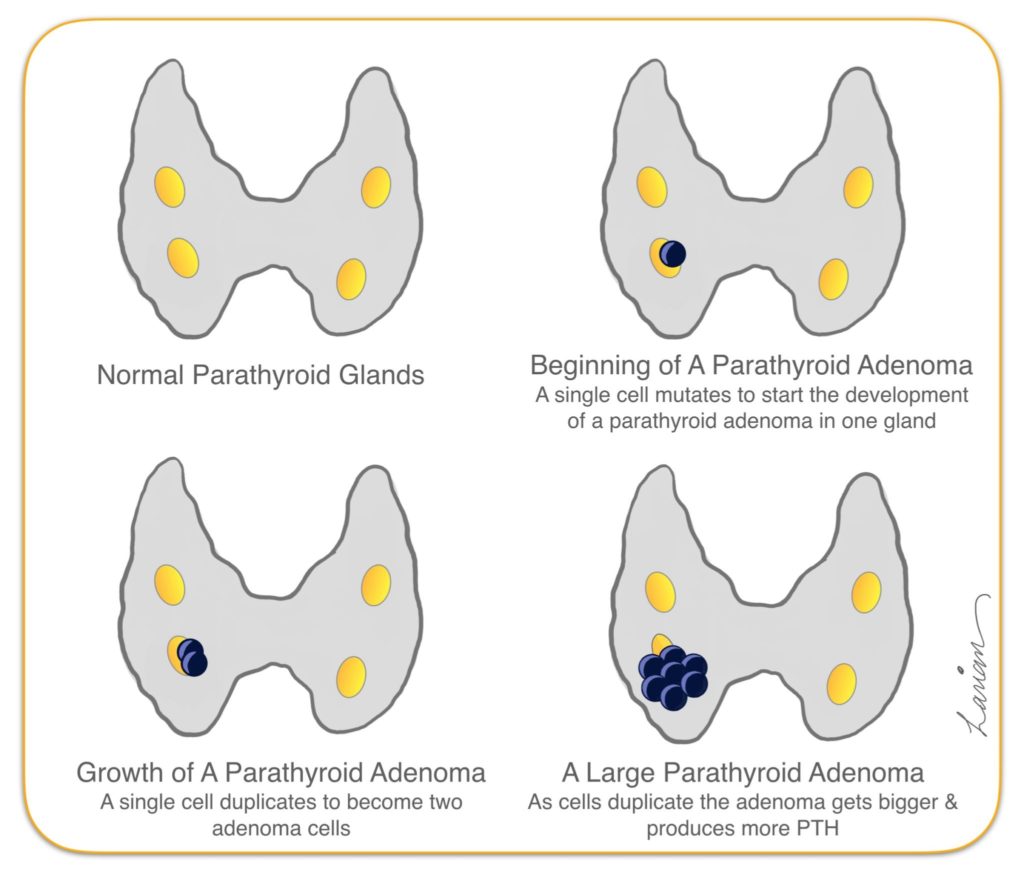 Rarely, parathyroid adenomas may appear in more then one gland at the same time.  They each may produce different amounts of PTH causing the elevation in calcium.  Adenomas in two gland are uncommon (10%), and adenomas in 3 gland (although they do occur), are exceedingly rare.

The only know cause of parathyroid adenoma production is radiation exposure, for example if a person has radiation to the neck to treat a cancer, years later they may develop a parathyroid adenoma.  There’s also genetic predisposition such as in MEN 2A, and other familial hyperparathyroidism conditions.  The great majority of cases however, have neither one of these predisposing factors, and are happening without a clear reason, at least not clear to doctors and scientists yet.

The objective of minimally invasive parathyroid surgery for parathyroid adenoma is to remove only the abnormal gland and leave the healthy glands undisturbed. Refer to page Parathyroidectomy Steps for Adenoma.

Parathyroid 4 gland hyperplasia develops because all the cells in all 4 parathyroid glands are abnormal.  Each parathyroid gland has roughly 5 millions cells within it.  These cells have genetic mutations in them that cause them to continually grow (Figure 3).  At the same time, they seem to have a tolerance for elevation in calcium. The rate of growth may be different for each these glands thus most often at the time of surgery one finds that each gland may be a different size.  Some may have such a slow growth rate that they may appear normal.  As these glands grow they produce more PTH, slowly elevating the calcium level in the blood stream.  On occasion a parathyroid adenoma may develop in one of these glands. 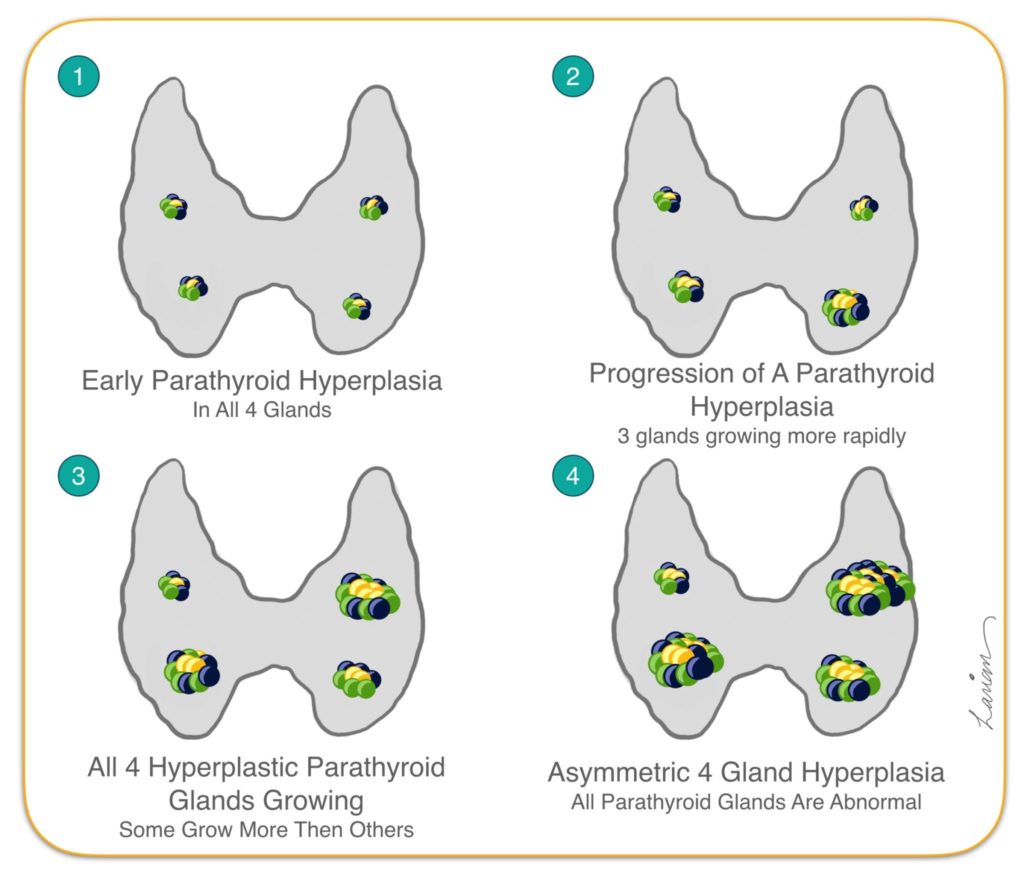 The aim of surgery for hyperparathyroidism due to 4 gland hyperplasia is not to get rid of (or remove) all abnormal glands, but rather decrease the number of abnormal parathyroid cells to the point where the functionality of the remaining parathyroid is in the normal range.  Basically, the more abnormal parathyroid cells there are, the more PTH is produced above the needs of the body.  So by reducing the number of abnormal cells in surgery the production of PTH is brought down to levels that meet the body’s needs.  Refer to page Parathyroidectomy Steps for Hyperplasia. 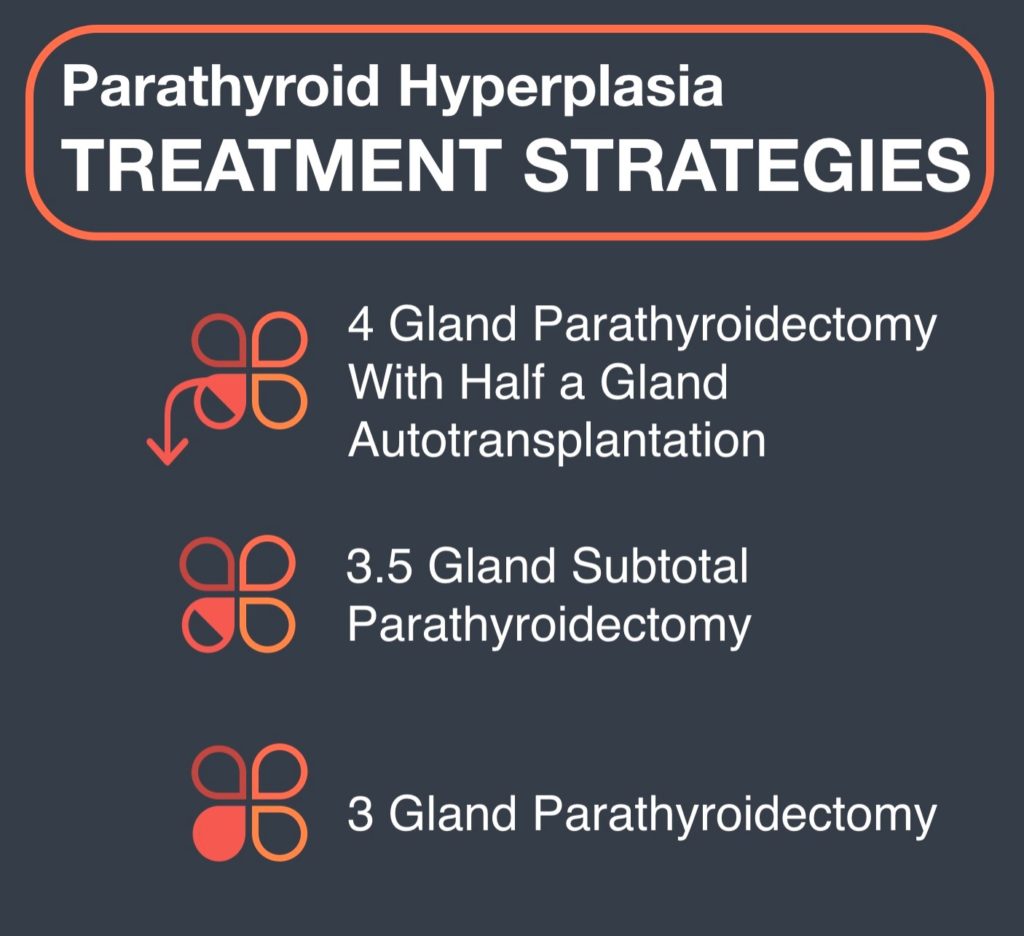 How To Distinguish Between A Parathyroid Adenoma & Hyperplasia

Both parathyroid adenoma and hyperplasia can present with elevations of calcium & PTH, they can also present as normocalcemic HPT or normohormonal HPT.  So based on lab tests alone one can’t reliably distinguish between an adenoma or hyperplasia.  Having said that when PTH levels are above 150 pg/mL the chance of hyperplasia is around 5%, while with PTH levels lower than 100 pg/mL the chance of hyperplasia goes up by 3-4 folds.   But even at low PTH numbers the chance of parathyroid adenoma is significantly higher (75%) then hyperplasia.  The group at University of Wisconsin published their hyperparathyroidism data and they found that patients who had hyperplasia in comparison to patients with adenoma had lower 24 hour urine calcium, a higher alkaline phosphatase, and a higher BMI (body mass index).

When hyperparathyroidism patients have two or more localization studies (ultrasound, Sestamibi SPECT, or 4D CT scan) that are negative, or not able to find an enlarged over-active gland, then the odds of that person having hyperplasia is also higher.  This makes sense because if all 4 glands are only slightly larger than normal, but all are producing extra hormone (PTH), then each parathyroid gland may not need to be so large to have a deep impact on the person.  Because of this slight enlargement they may not be visible on scans.

Outside of these potential indications that the person has a higher likelihood of having parathyroid hyperplasia there is no known clear indicator at this point.  But your surgeon must always be ready for this possibility and be experienced enough to deal with it appropriately.

Although in most cases of primary hyperparathyroidism due to the development of parathyroid hyperplasia is likely a slower more gradual process, it is hard to be able to figure that out without having calcium, PTH & vitamin D labs for many years.  Unfortunately, most people don’t have these blood tests done on a routine basis.

Do people who have parathyroid adenoma have more symptoms compared to one’s with parathyroid hyperplasia?

Unfortunately, the symptoms for both conditions are the same.  You cannot distinguish between the two conditions based on symptoms.

Is parathyroid surgery more challenging for hyperplasia or adenoma?

Parathyroidectomy is usually more challenging for hyperplasia, because all 4 glands need to be found and then the decision needs to be made as to which glands need to be removed.  This can be challenging, because some parathyroids that are hyperplastic can appear normal.  This is when the surgeon’s experience and expertise becomes very important to achieve good outcomes.

Is it possible to identify an enlarged or overactive parathyroid gland on a sestamibi, 4D CT scan, or ultrasound and still have hyperplasia?

Yes, hyperplasia is often times asymmetric, meaning not all of the abnormal parathyroid glands are the same size.  It is possible that of the 4 abnormal hyperplastic parathyroid glands, one may grow to be much larger then the others.  And because of this may show up on a scan, making the surgeon think this is the only abnormal scan.  That’s why during surgery assessing the functioning of the other 3 glands is important.  At the CENTER we prefer PTH testing to make this assessment because it can directly and immediately tell us if another gland, or all other glands are producing too much PTH and need to be removed.

Does the PTH level affect the chance of finding the abnormal gland?

How can a person know that they have hyperplasia before going to the operating room?

The only people that know that they have hyperplasia are the ones that have either familial hyperparathyroidism where all the other members have had hyperplasia (MEN 1 syndrome), or if they have secondary hyperparathyroidism due to kidney failure.  In all other circumstances there is no way to be certain.  However, we also know that when the PTH levels are high (greater then 150 pg/ml) the chances of hyperplasia is around 5%.  And when the PTH is less the 100 pg/ml then the chance is significantly more.