Parathyroid glands are mainly responsible for controlling the calcium levels in the body within a very narrow range so that the body can work properly. Calcium is a vital nutrient that is used by every single cell in the body for normal daily functions; it is responsible for sending messages inside the cells, building bones, sending signals in-between nerves, ﬂexing muscles, and so much more. If calcium levels are not exactly right, a variety of problems can happen, including bone loss, intestinal symptoms, kidney disease, and mental disturbances. 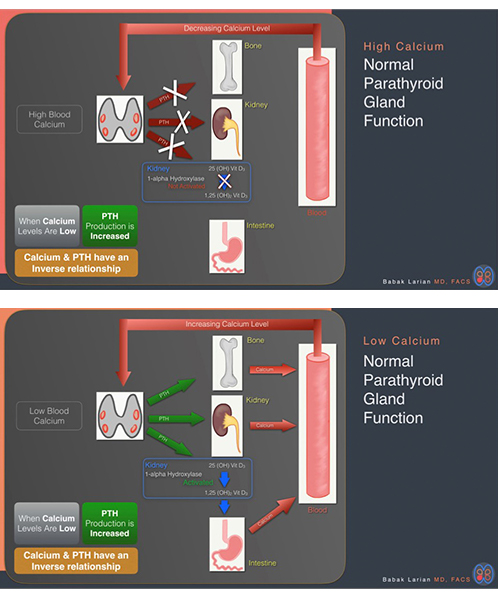 Dr. Gordon Strewler published an interesting article in 2005 that showed the relationship between calcium and PTH. He showed that there is an inverse relationship between calcium and PTH, with PTH being low when calcium is high, and PTH high when calcium is low.  The ﬁrst graph below shows his results. Dr. Strewler found that when the calcium level changes only a minimal amount, the parathyroid gland responds immediately to bring the calcium back to the person’s normal (called the calcium set point). The calcium set point functions similarly to a thermostat; when you set the temperature to 70°F, the heater will work when the temperature in the house goes down to 67°F, and stop working when it goes above 70°F. The parathyroid glands keep calcium at the calcium set point or close to it. If the set point is 9.5 mg/dL as in the graphs above, then the parathyroids will work 24 hours a day to keep the calcium level close to that. If there are slight changes, the parathyroid glands react immediately to bring the level back to the set point. The body can tolerate an elevated or reduced calcium level for a short period of time, but when an elevated or reduced level stays the same for an extended period, then all organs begin to malfunction. So, the range of normal that the parathyroid will allow is a very narrow range. As seen in Graph 3 above, the set point is 9.5 mg/dl, but the range is the area in the grey box from 9.2-9.8 mg/dl. Calcium may occasionally go out of that range, but as you can see based on the graph, the PTH reaction is dramatic to bring the calcium back into range. The laboratory normal range (also known as the reference range) is shown in the graph as the green shade (8.5-10.2 mg/dl) in between the yellow shaded areas at the two ends of the graph. PTH is very interesting in and of itself. It is a 3D protein that has parts that attach to other proteins, called receptors, on the surface of other cells in a lock-and-key fashion. This is how PTH gives its instructions to other tissues like the bones and kidneys. PTH delivers a command, so it has been designed to disintegrate shortly after it has been released in the bloodstream.  Half of the PTH proteins disintegrate within 5 minutes of going into the bloodstream. This ensures that if the parathyroids want to give a different command a few minutes later, then PTH is not hanging around in the blood to interfere with the new command. The rapid intraoperative PTH test done during surgery takes advantage of this short lifespan (also called a half-life). The parathyroid receptor is present in many different areas of the body, including the kidneys, bones, adrenal glands, cartilage, heart muscle, and nerve cells in various parts of the brain. When a person has hyperparathyroidism, some of the symptoms are due to high calcium in the blood, and others are directly from the PTH.  In fact, some of the symptoms directly correlate with the level PTH in the blood. 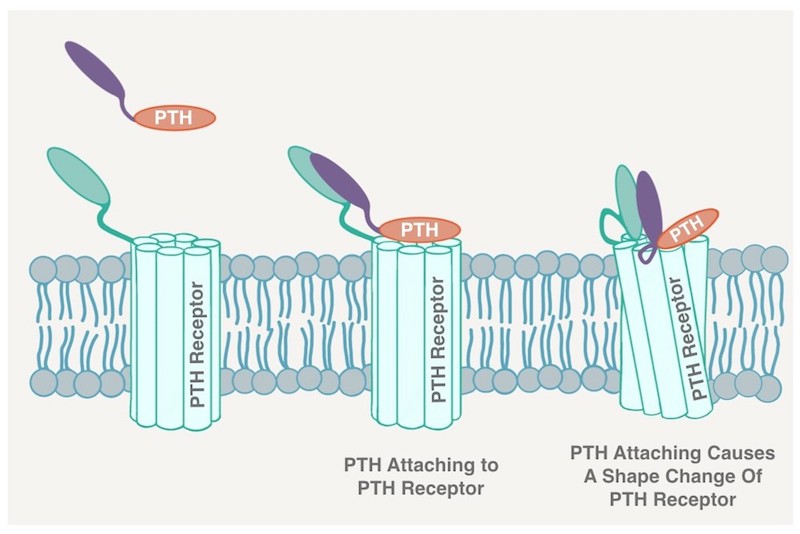 Calcium and PTH on a Cellular Level When calcium levels are high in the blood, they seep out of the blood vessels into the ﬂuid surrounding cells. The calcium elements will then attach to the calcium sensing receptor (CASR) on the surface of parathyroid cells and start a series of reactions that ultimately result in stopping the release of PTH from the cells. In doing this, the PTH level in the bloodstream comes down, because whatever PTH was already in the blood will quickly disintegrate and disappear.

On the other hand, when calcium levels are low, and no calcium is attached to the CASR, another set of reactions occur that ultimately increase the PTH release outside of the cell and into the bloodstream. When low calcium levels happen for a short period of time, then the parathyroid cell will signal the sacs (vesicles) containing PTH to merge with the surface and release what is inside the sac (PTH). When the low calcium level goes on for an extended period of time, in addition to releasing the PTH containing sacs, the parathyroid glands send signals to the nucleus (brain of the cell) to start the process of manufacturing PTH and place it in the storage sacs. If the calcium level stays chronically low, then, through a different series of reactions (P21 protein), parathyroid cells are signaled to duplicate themselves (proliferate). Thus, the parathyroid gland may grow to keep up with the demands of the body.

If there is a disturbance in just a single cell on one of the parathyroid glands and the calcium levels are no longer being monitored properly, you will develop hyperparathyroidism. Watch the video below to learn about hyperparathyroid disease.

Q: What is considered a “normal” PTH level?

A: The average PTH level ranges from 10 and 65 pg/ml. If an individual’s PTH level rises above this range, he or she may be dealing with hyperparathyroidism. Q: What causes a person’s calcium level to rise?

A: There are many reasons for calcium elevation. But the most common cause of high calcium in patients that are not hospitalized is parathyroid overactivity. PTH effect in the bones, gut, and kidneys causes elevated calcium level.

Q: Can an elevated calcium level contribute to parathyroid cancer?

A:  Foods that contain calcium and vitamin D often promote good parathyroid health. Calcium-rich foods include milk, cheese, yogurt, spinach, and broccoli. Also, vitamin D-rich foods include fish, mushrooms, and beef liver. All of the aforementioned foods can be integrated into a person’s diet.

Parathyroid gland surgery may be required if the parathyroid glands stop functioning properly. Oftentimes, it is difficult to identify parathyroid disease symptoms. Thanks to blood calcium tests, an individual can find out if he or she is dealing with hyperparathyroidism.

If a blood calcium test reveals elevated blood calcium levels, a doctor may perform additional tests to verify his or her results. Then, if a doctor believes an individual is a good candidate for parathyroid gland surgery, he or she crafts a custom hyperparathyroidism treatment plan.

Choose the Right Surgeon to Perform a Parathyroid Gland Procedure

Dr. Babak Larian of the CENTER for Advanced Parathyroid Surgery is an expert head and neck surgeon. He understands the intricacies of minimally invasive head and neck procedures and is happy to share his surgery insights with patients. That way, patients can receive comprehensive support and guidance throughout the parathyroid surgery cycle.

Dr. Larian is available to meet with an individual to assess his or her parathyroid gland function and offer personalized treatment recommendations. To schedule a consultation with Dr. Larian, please call us today at 310-461-0300.